What is the Volvo Super Truck, and would you like to buy one?

Is there a trucker on the planet that wouldn’t want a super truck?

That would be such an easy bet to make! What heavy rig driver, or truck fleet manager would turn down the opportunity to buy a rig that is named something so awesome? 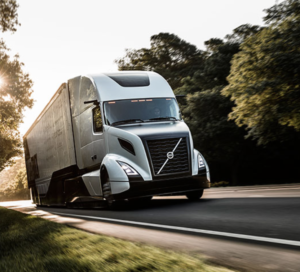 Well a few years back the United States Department of Energy challenged Volvo to build exactly that, a Super Truck! What was the criteria the USDE set for a vehicle to qualify as a Super Truck? They wanted a truck that reduced freight efficiency and emission’s by fifty percent, AND they wanted it done inside of a five year time frame.

By any measure that is a super-ask for a super-truck (to say the least!). And since here we are talking about it, to answer your next question, yes Volvo delivered on this task and completed the worlds first Super Truck! This vehicle is a truly unbelievable machine. Among the MANY things that were accomplished in this project was reducing the vehicle weight by thirty two hundred pounds.

Thats almost one and half tonnes of weight!

This was accomplished in part by using,

Want to buy a super truck for yourself or your truck fleet?

While there is only one Volvo Super Truck, and it isn’t for sale (as far as we know), when you purchase a new Volvo Truck VNL you’re actually getting elements of the Super Truck.

This is perhaps one of the best things about the Volvo Super Truck program. It allowed (inspired?) the Volvo engineers to push the boundaries of what people thought possible with many components.

Once this happened, it wasn’t long before these enhanced and improved components started showing up in the Volvo VNL trucks you can buy today.

While the list of things that have been incorporated is numerous, things such as aerodynamic properties, wave pistons, and common rail fuel injection systems all came from the Super Truck program.

So in many ways, the Volvo Trucks you buy today, often have super truck D N A in them.

For over three decades, Gerrys Truck Centre in London Ontario has been the Volvo heavy truck dealer of choice. For everything from sales of new and used (pre-owned rigs) as well as parts and service, and pride ourselves on top quality service.